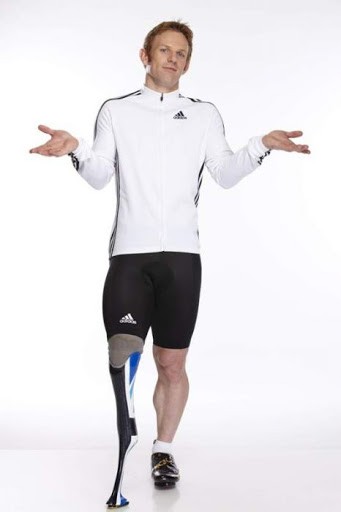 Jody is one of only a handful of Olympians and Paralympians to win gold medals in two sports. He won the 100m Butterfly at Sydney and cycling’s 1km Time Trial at Beijing.

Jody Cundy is one of only a handful of Olympians and Paralympians to win gold medals in two sports. He won the 100m Butterfly at Sydney and cycling’s 1km Time Trial at Beijing. He holds five Paralympic gold medals.

Jody’s right foot was amputated when he was just three years old. With an artificial limb he was swimming at club level against able-bodied swimmers by the age of 10, and representing Great Britain at the World Swimming Championships by 16. He surprised everyone by winning in the Butterfly, the first of 23 international competition medals (including 14 golds) in a 10-year career in the pool.

A trial in a velodrome then led to Jody being spotted by the Team GB track cyclist coach. In his first ride he broke the British record for the Flying 200. He went on to set a new world record in the team sprint, along with Darren Kenny and Mark Bristow, and it was only a matter of time before he struck gold again at Beijing. He also became the fastest solo Paralympian of all time covering 200m in just over ten seconds in the Flying 200.

Jody broadened his focus to endurance as well as sprint races in preparation for London 2012, and entered the games as favourite to take a sixth gold medal. However, when the competition came, all did not go to plan. A faulty starting gate saw Jody disqualified from the 1km time trial and his explosive reaction created one of the talking points of the games. He later apologised to fans for his outburst, and went on to win bronze in the 4km event.

As well as competing, Jody has established his own cycling team, the Para-T Paracycling Team, which is made up of elite paracycling athletes to help promote disability sport.