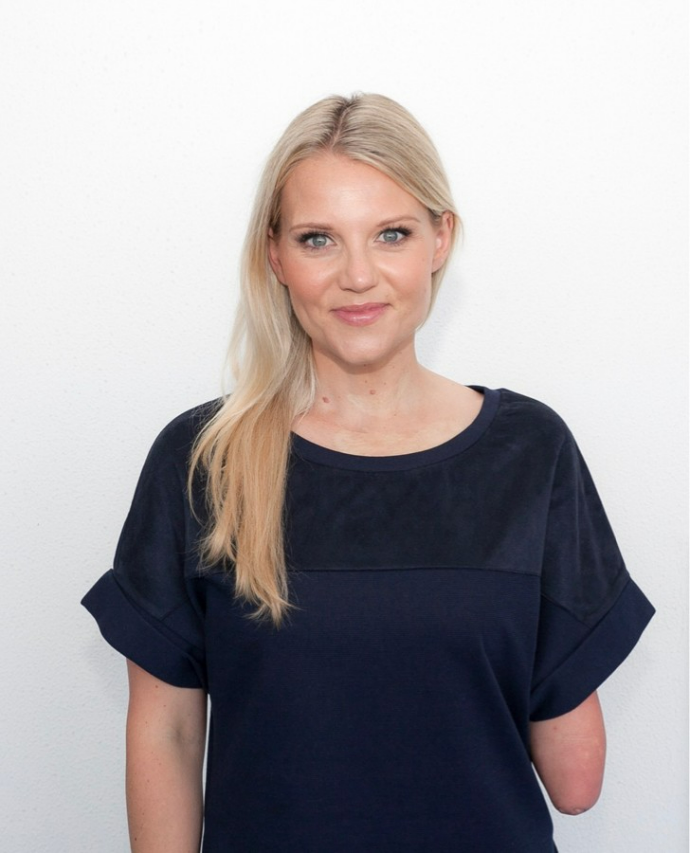 Jessica Smith has an incredible story of triumphs and tribulations.
Born missing her left arm and then suffering a horrific kitchen accident when she was a toddler sustaining burns to 15% of her body, she defied odds and went on to represent Australian in the sport of swimming for seven years, culminating in representing Australia at the 2004 Paralympic Games.

Sport gave Jessica ambition and focus while she tried to confront societal obstacles around body image and disability acceptance. She was able to eventually break free from personal struggles with depression and eating disorders in her 20’s. But perhaps the most important story there is to tell about Jessica, is that of the inspiring woman she is today; since retiring from her international swimming career Jessica has gone on to become an internationally recognised advocate for positive body image, dedicating her life to raising awareness around diversity, disability and inclusion.

Jessica is an accomplished motivational speaker and MC, having stood on many platforms throughout schools, universities, businesses and community organisations, including the UN, where she shares her personal journey and highlights the importance of Mental Health awareness, focusing particularly on body image and diversity & inclusion.

Jessica completed a BSc. Population Health from the University of Wollongong, Australia, she has also completed executive studies in Gender Diversity at INSEAD and is currently writing her PhD application to be accepted for a Doctorate in Health Psychology.

Jessica is continually acknowledged for her incredible advocacy work; awarded ‘Emerging Leader’ by the Australian Government at the Positive Body Image awards, as well as being awarded a Pride of Australia Medal. In 2015 Jessica was a state finalist for Young Australian of The Year and more recently in 2017 she was named Cosmopolitan Magazine ‘Woman of The Year’ in the category of Game Changer.

Most recently, Jessica was awarded one of Australia’s highest honours, the Medal of the Order of Australia for a number of roles within the community, and dedication to sport.

Jessica is also the mother of three young children. Her journey into Motherhood inspired her to write a series of children’s books about disability and acceptance. After growing up with limited resources on these topics, Jessica wanted to create characters that represent what kids see in every day life. Her first book ‘Little Miss Jessica Goes to School” is about a young girl with one hand on her first day at school, where she learns that being ‘different’ is OK.

Jessica has recently relocated from Australia to Dubai, where she is working as a speaker and advisor on the topics of diversity and inclusion.